The exhibition Image, Body, Pathos shows paintings from more than seven decades of the impressive creative oeuvre of Catalan artist Antoni Tàpies. Tàpies, born in Barcelona in 1923, had a distinct influence on European painting in the second half of the 20th century.

When the Catalan artist Antoni Tàpies (1923–2012) died earlier this year at age 88, he was hailed as "the last great artist of the 20th century." The claim is based on the decisive influence of his “material paintings” on the development of contemporary art. His use of sand, cement, paste, granite dust and found objects of every-day use has inspired generations of artists and changed the way they think about painting.

Image, Body, Pathos consists of paintings on canvas or wood (mostly mixed media) from 1958 to the present. Included are many key works that exemplify Tàpies’s unique use of materials. Thematically, the exhibition focuses on the double perspective of body-image and the body of the image. The human body does not appear in Tàpies’s paintings as representational portraits but as imprints, symbolic suggestions, relief-like plasticity or through the integration of personal items, such as clothes. With his “material paintings,” Tàpies thus uses the physical characteristics of the materials to investigate the self. His paintings develop in a dialogue with his own body but the outcome is new pictorial corporeality, where the paintings themselves appear as material “bodies”, with life of their own.

The exhibition was curated Dr. Eva Schmidt, Director of the Museum für Gegenwartskunst Siegen in Germany and has been developed in close cooperation with the artist and the Fundació Antoni Tàpies in Barcelona.

The exhibition is set up in collaboration with The Spanish Cultural Action, AC/E and sponsored by The Honorary Consul of Spain in Iceland and The Embassy of Spain in Norway. 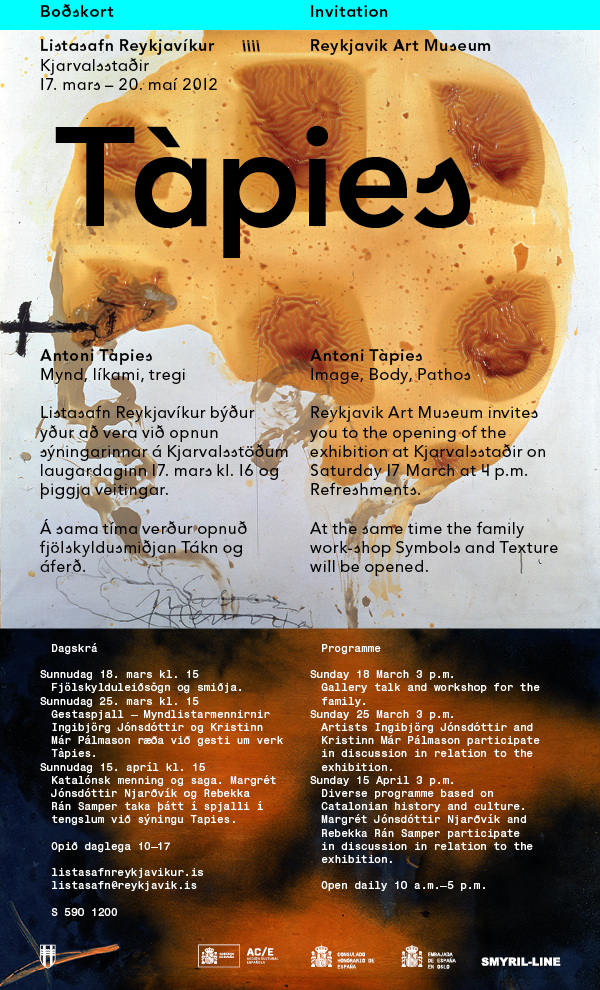