Trophies is a work of art that has been installed on the roof of Arnarhvoll at Ingólfsstræti in Reykjavík, to celebrate a year of art in public spaces, but in 2019 Reykjavík Art Museum focuses on outdoor artworks, with instruction, events and exhibitions. The project is a collaboration with Reykjavík Art Museum and sponsored by the Reykjavík Municipal Treasury.

Artist Steinunn Þórarinsdóttir has created numerous works for public spaces in Iceland and abroad and outdoor art has always been a large part of her artistic endeavours. The work in question consists of eleven aluminium cast figures which she created between 2015 and 2017 – originally meant for the Museum of Military History in Dresden.

The work, titled Trophies, was installed on the museum building in Dresden, formerly the armoury of the German army. The building had previously been decorated with military figures but they were stolen during the war in 1943 and have never been found, in spite of extensive searching.

Steinunn Þórarinsdóttir is born in Reykjavik, Iceland. She lived in England and Italy where she got her training as a sculptor. Steinunn has been working professionally for close to 40 years and has exhibited widely in Europe, Japan, USA and Australia. Her works are in private, public and corporate collections worldwide. She works in various forms of sculpture and uses many different materials for her artistic expression. Steinunn has through the years done numerous commissions both indoor in specific spaces as well as site specific outdoor work. Steinunn lives and works in Reykjavik, Iceland. 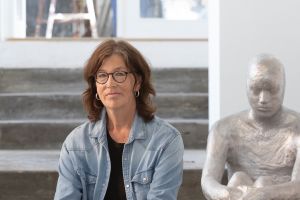