Roni Horn Her, her, her and her

Foreign artists have visited Iceland from the 18th century onward and for
many the country has been a source of artistic inspiration. Although the
travels of those best known have generally made the news, Icelanders have
hardly realized the full extent of the influence that the country, its
environment and people have had on the foreign artists that have come here,
influence that they have subsequently taken back home with them. Icelanders
have always been a little surprised by - and secretly proud of - this
attention; the visitors have been given the title "Friend of Iceland" both
in jest and earnest, especially when it was clear that the country and its
people had acquired an important place in that person's heart.

There is one Iceland-friend who has cultivated ties with the country and
its people longer than most, yet who has chosen to keep a low profile here,
despite the fact that over the past few decades she has been a rising star
in the international art world. Artist Roni Horn was born in New York in
1955 and came to Iceland on her first trip abroad, in 1975. She has come
here regularly since, looks upon this as her second home and has made a
vast number of friends and acquaintances all around the country.

The first decade that Roni Horn visited Iceland one might say that she kept
the country to herself and didn't really use it in her work. She travelled
extensively and collected images first and foremost in her own mind and
heart. Since 1988 she has often taken her camera along and photographed
things that caught her eye, finding many subjects for her artwork along the
way. The land has provided a venue for her ideas; simple and complex
landscapes take on a unique and powerful presence in her work. Particularly
memorable are her pictures of bubbling hot spring puddles and aerial
photographs of glaciers that, when flattened, are almost unrecognizable.

Roni Horn's work is characterized first and foremost by simplicity -
nothing unexpected happens and everything is in balance. She creates her
work in various ways; sculptures, drawings, photographs and text are among
her forms of expression. Yet what her works have in common is serenity.
Tension and anxiety are far away. Roni Horn focuses on her subjects,
allowing nothing to disturb her, and this is communicated to the viewer.

The relationship between viewer and work is important to Roni Horn. She
does not look at a sculpture or photograph merely as a work in itself, but
also examines the relationship of the viewer to the work - not only
intellectually, but also physically.

In Roni Horn's mind, Iceland is a certain counterbalance to the metropolis
that is New York - and now, after a relationship lasting almost 30 years,
she considers her visits here necessary to keeping her life in balance. Her
work as it relates to Iceland is first and foremost in photographs and
text, and various books have been published. The series To Place now counts
eight books, all of which have Iceland as their focal point.

Water has fascinated Roni Horn since she first visited Iceland. Hot,
natural pools found in various places throughout the country have appeared
repeatedly in her work: hot springs, swimming pools and man-made structures
relating to water. Her relationship to water is personal - she enjoys
bathing in it, feeling its effect on her. One of her more memorable works
is the photography series You Are the Weather from 1994-95, close-up facial
portraits of Margrét Harldsdóttir Blöndal in hot pools throughout the
country, where water, light and steam play a role as important as the
unaffected expression of the model.

The indoor swimming pool Sundhöllin í Reykjavík has a starring role in a
handful of Roni Horn's works. This remarkable building, designed by
architect Guðjón Samúelsson and built in 1922-37, is a great favourite of
hers and she has photographed it in detail. In the work exhibited here at
the Reykjavík Art Museum, numerous photographs of the women's changing
room are assembled like parts of a quilt. They are put together in a way
that reminds us of our fragmented perception of the environment, through an
eye that blinks constantly. The mysterious labyrinth of the changing rooms
is hard to understand in these pictures, as it is even for those who are
physically there. Through the photographs, Roni shows us the relationship
between doors, doorways and walls that are constantly changing, because as
soon as one space closes, another opens. White tiles of the simplest kind
cover the walls, wrap around corners and over edges and give the entire
space softness and curves. There is repetition in Sundhöll Reykjavíkur and
this is reflected in the assembly of the photographs that are very alike -
pictures of the same thing, and yet not the same. The assembly of the
pictures into whole surfaces is also important to give the viewer a clearer
picture of the space, which nonetheless continues to confuse him or her.
However, it is not that Iceland itself is the subject of Roni Horn's work.
Central to it is her own inner landscape, and in an interview with Jan
Howard she says,

It is a great honour for the Reykjavík Art Museum to exhibit the works of
this talented artist. The title "Friend of Iceland" is perhaps no longer
fitting for Roni Horn; the vision of the country and people that is
revealed in her work would suggest that she is not a guest, but rather one
of us.

Exhibition in cooperation with the Reykjavik Arts Festival. 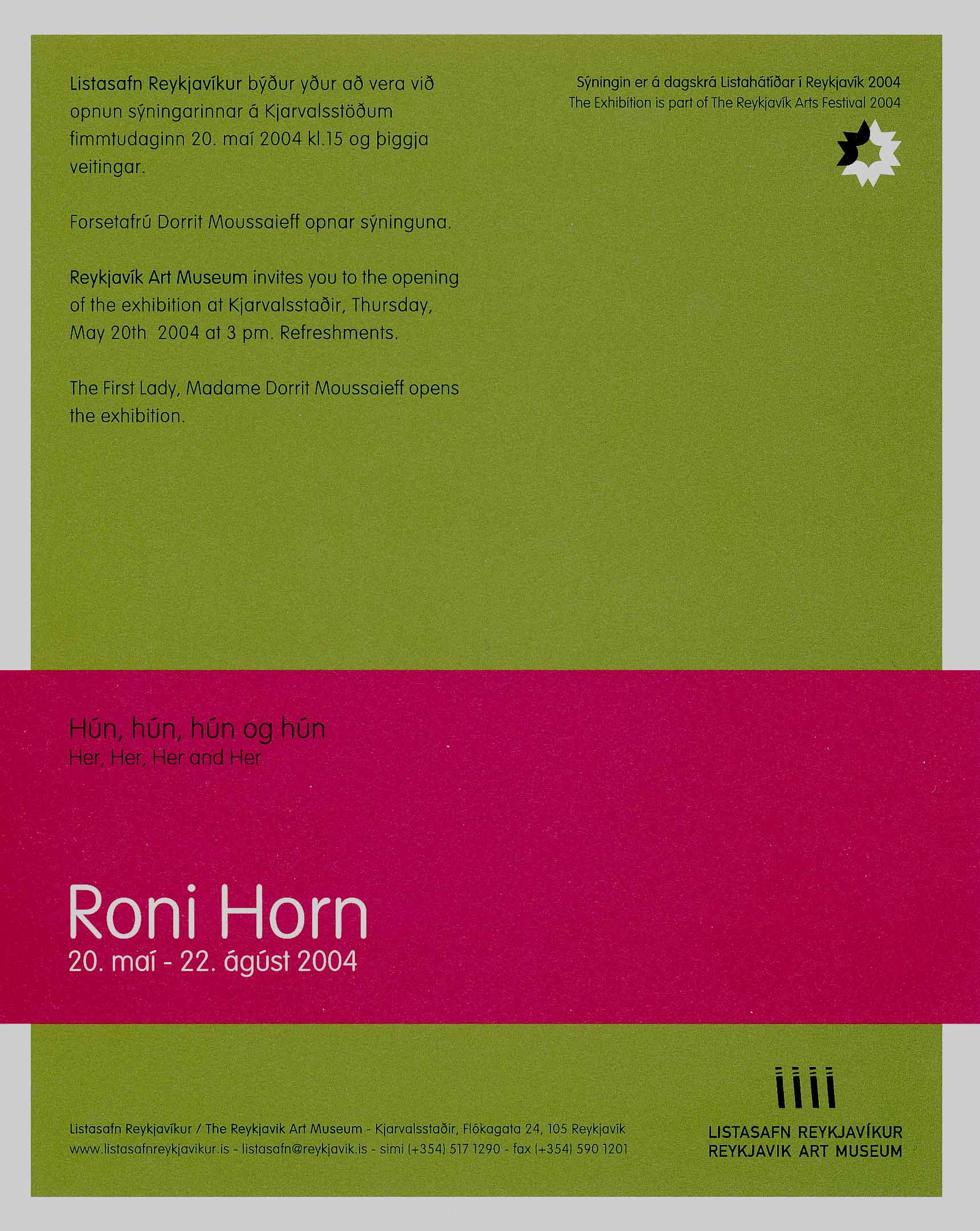 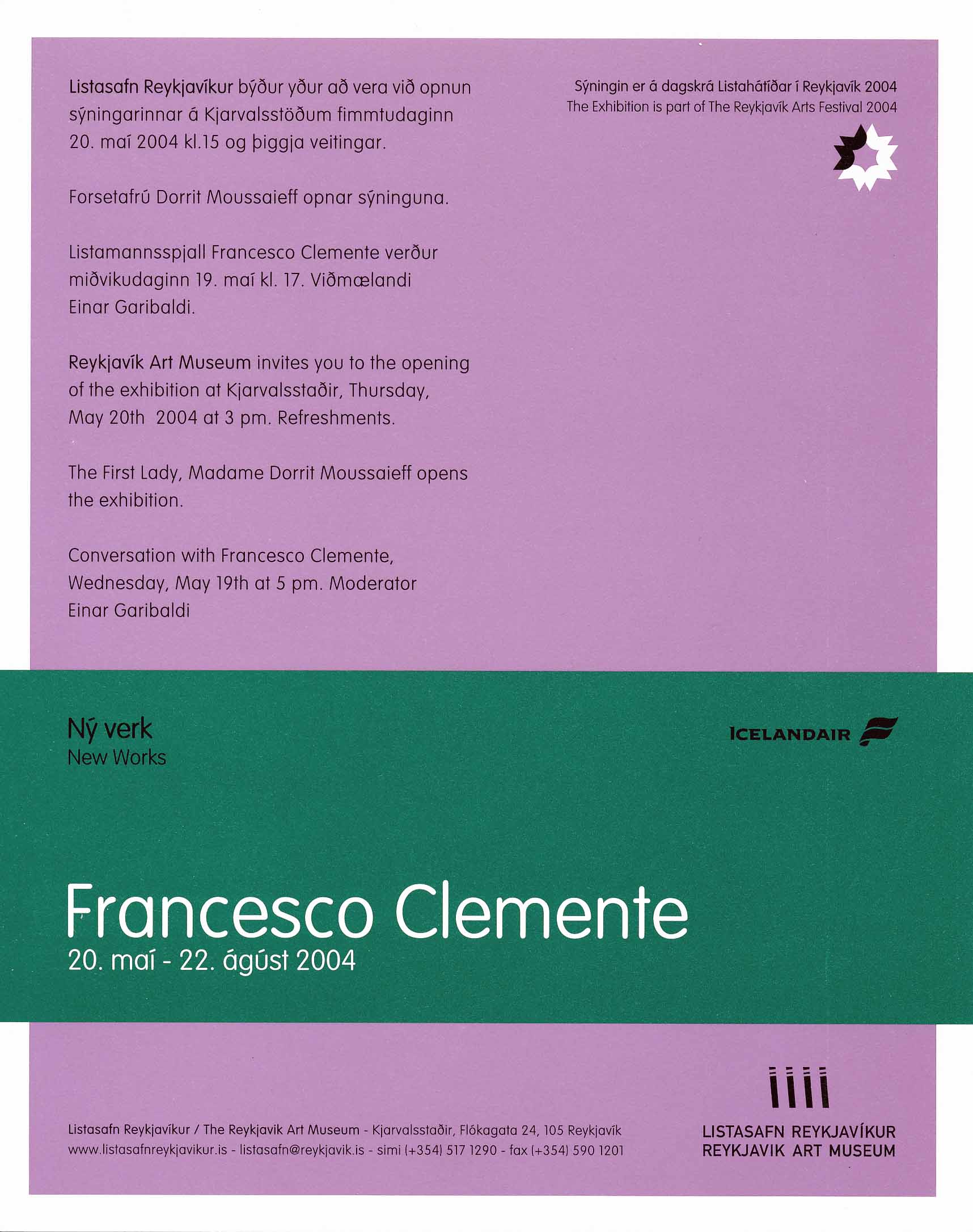