(to the North, the crystal of non-knowledge

a landscape to be invented

to the South, reflective memory

to the East, the mirror

to the West, stone and the song of silence)

I wrote messages, but received no reply
(Octavio Paz)

The Berlin based artist Monika Grzymala (b. 1970) is presenting a solo exhibition in Gallery A at Hafnarhús, in which a unique encounter occurs between an artistic intervention in the Museum’s architecture and extensive spatial drawing using kilometers of adhesive tape. Grzymala’s site specific installations in the exhibition are the artist’s personal response to the Museum’s space, inspired by a poem with eponymous title by Mexican author Octavio Paz, published on the very first page of Henri Lefebvres legendary book „The Production of Space“.

Monika Grzymala describes her work with the German word creation Raumzeichnung, literally “drawing through space,” a special method she has developed in making three-dimensional drawings.

The title Envoi of both, the exhibition and the poem what does it translate as?

The French wording and title of the poem Envoi is a mystery. in Henri Lefebvre’s book The Production of Space, there is Paz’s poem on the very first page. But, Octavio Paz was Mexican, Henri Lefebvre was French, the English version is the only existing version of the poem, yet the title of this poem is in French. In short, Envoi means to “send out” and in French it is also used in a way that means not to just send out a letter, but to send out emotion, in other words envoi means communicating emotion to other people.

Based on the poem Envoi Monika Grzymala started planning the concept for her solo exhibition at Reykjavík Art Museum Hafnarhús. In reference to the poem and the cardinal points named in it, there are now four groups of site specific works presented at Gallery A:

Studio Berlin 2010-2015: to the North (the crystal of non-knowledge, a landscape to be invented) six images pasted directly on the wall portraiting artist’s constantly transforming studio space in Berlin between the years 2010–2015.

Close Up 2015: to the South (reflective memory), in the windows facing the street, four large scale prints on transparent film showing detail views of site specific installations currently on view in the dual exhibition Proxemia with Nikolaus Gansterer at Marie-Laure Fleisch Gallery in Rome. Visitors approaching Hafnarhús can see from the street the multi-layered space created for Envoi and experience that view on the exhibition already from outdoors.

Raumzeichung (compass): to the East (the mirror), a site specific work made of 15 km of transparent-clear and silver-reflecting tape installed between four columns. The cross-shaped installation is positioned like a large scale compass in the gallery and showing towards true geographical directions, the reflecting side, a quasi-concave mirror, is facing East and reflecting another site specific work with the title Raumzeichnung (horizon) for which the artist used dark-gray shiny graphite powder applied directly with hands to the back wall.

In their specific ephemerality all works are created for the Envoi exhibition and completely gone when dismantled after the show. 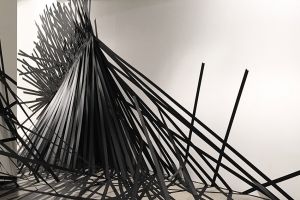 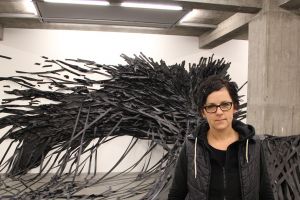