The exhibition Touching the Membrane does not dwell on the literal implications suggested by its title. Though it underlies Margrét H. Blöndal’s fundamental idea, her creative process expands the gesture of tracing invisible layers of skin or haze in an abstract and intuitive manner. Margrét senses the membrane as still or moving, or it could be encasing and encased—when a room is concerned—by the walls, ceiling, floor, pillars, and all the splendours and flaws of an architectural space. As in previous installations, she has used sculptural objects to accentuate the subtleties of Gallery B, which she explored and discovered just days before the opening of the exhibition. It is also in the same room that Margrét has created her sculpture from materials that respond to the space through textures, weights, lines, and colours.

Margrét’s sculptures share a common indication of being manhandled: they have all been moulded, tied, wrapped, rolled, squeezed, stretched, bent, crumpled, torn, broken, or assembled. The placement of the sculptural elements in the gallery reflects the artist’s simultaneous contemplation of each object on its own and as part of a group—not unlike writing musical notation, in which each single note is determined by its placement on the staff, and groups of notes and rests determine the sound and silence, pitch, rhythm, sonic structure and texture of a composition expressed through time. Margrét’s sculptural objects are reminiscent of melody and harmony, tempo and meter that define an impartial space and quietly electrify the air around them. We sense curious articulations among the objects themselves and the space that holds them.

The openness in Margrét’s works stems from her ability to achieve a delicate balance between intention and a surrender of control to her materials and circumstances. To reach this state for this exhibition, she consciously focused on the gallery space in her mind while drawing and writing in her studio during the months before she started creating the sculptural objects in Gallery B. The drawings in Gallery C are results of Margrét’s prolonged exercises that send her awareness to a subconscious level where she allows her creative process to unfold without becoming obscured by preconceptions. Her works challenge and expand our ways of seeing: sculptures as singular entities form entire constellations, and each and every one is separated from and joined to others by membranes that become “visible” to contemplating eyes. While Margrét compellingly mutates materials and ideas to make a visual argument, her works carry a multiplicity of meanings and do not offer a singular interpretation.

In 1993, Margrét H. Blöndal graduated from the mixed-media department of the Icelandic Academy of Arts and Crafts, and in 1997 she received a MFA from the Mason Gross School of Arts, Rutgers University, New Jersey, USA.

Her recent participation in group exhibitions include shows in 2006 at the Museum of Akureyri, Iceland; Mother’s Tank Station, Dublin, Ireland; and Kunsthaus Baselland, Muttenz/Basel, Switzerland. In 2005, her works were included in exhibitions at MAC-Museum of Contemporary Art, Chile; Plug-In Institute of Contemporary Art, Manitoba, Canada; Site-Actions, Lodz, Poland; The Museum of Árnes, Iceland; and the National Gallery of Iceland.

Margrét’s numerous awards in 2006 alone include her nomination for the Icelandic Visual Arts Awards, a two-year stipend from the Icelandic Artist’s Fund, and her selection as a resident for the NKD Nordic Artists’ Centre in Norway. 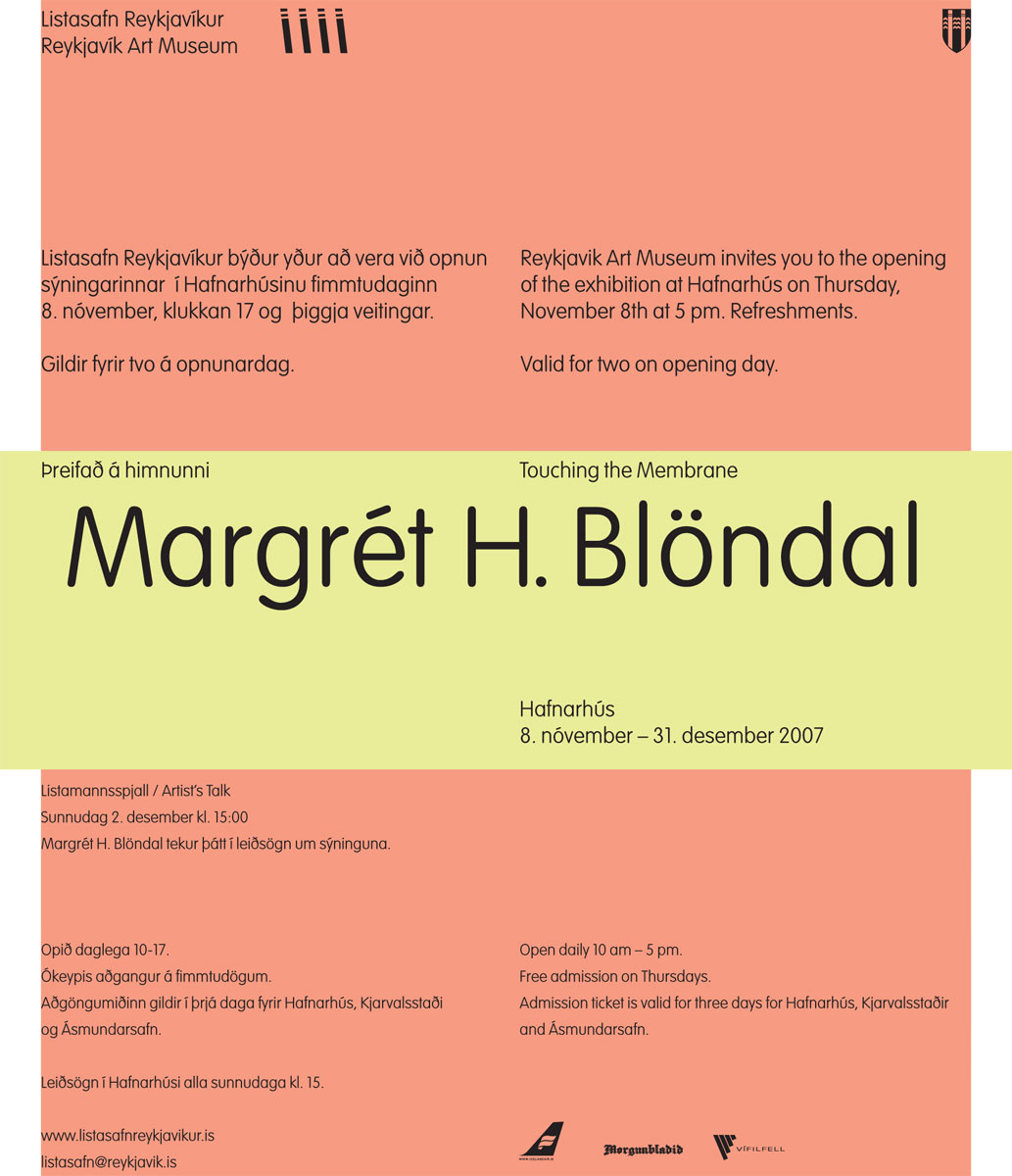 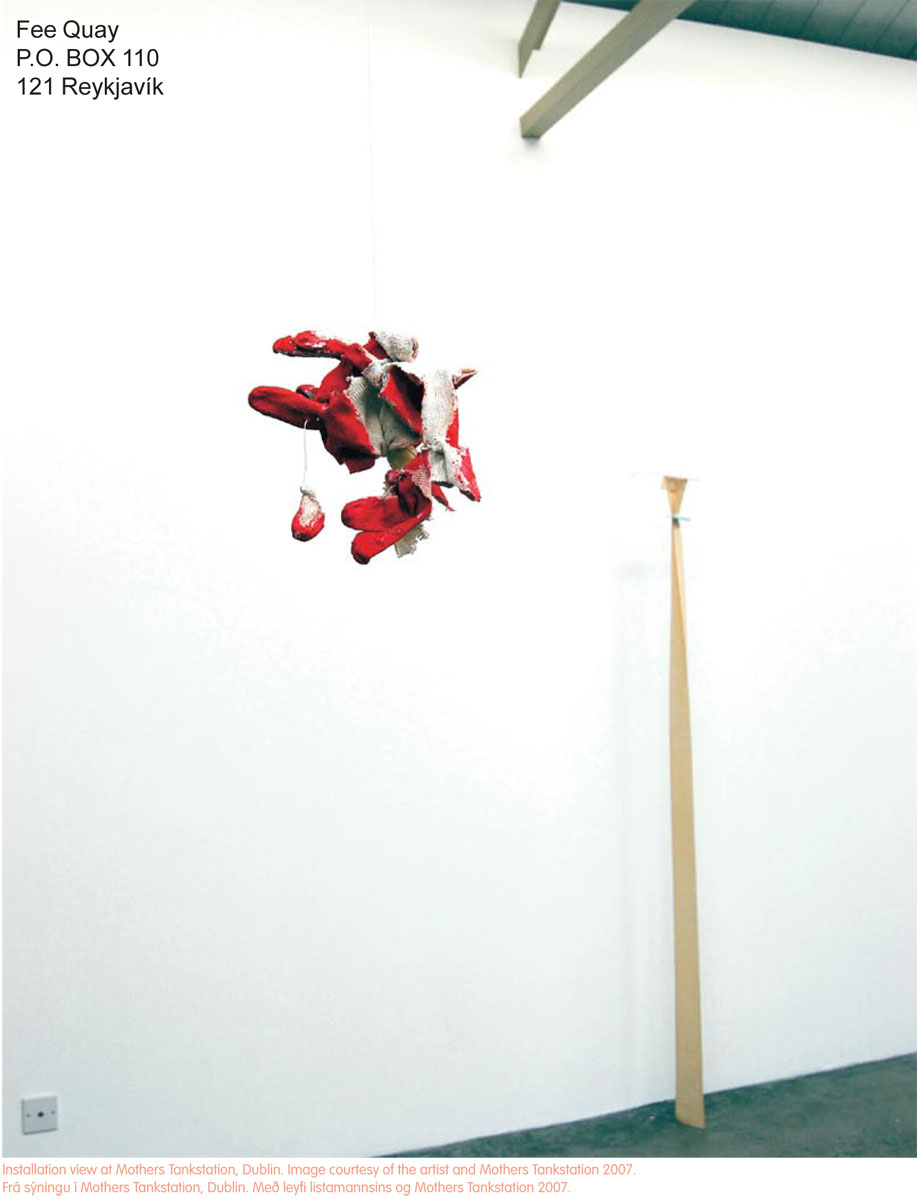