The photograph was one of the greatest inventions of the 19th. century. It then became one of the most important mediums of expression in the 20th century, along with its descendants – films, television, videos and digital imagery in all possible forms – that by all counts will dominate pictorial expression in the century we now live in.

The Icelandic word ‘ljós-mynd’ is highly descriptive: it is the light (ljós) that creates the image (mynd) that the viewer is faced with after the technical handling of the photographer. This definition is also at the center of the magic found in the art of Brian Griffin. Through his work with light, his preparation in how it will enbrace and form the subject, he is able to create the wonders that appear in his photographs.

Brian Griffin is of the post-war generation, born in 1948 in Birmingham in England, at the center of heavy industries in one of the most vibrant industrial power of history. This part of the country, the Midlands, was the foundation for the economic life of Britain at the time. Coalmines, steel mills and other industries were rebuilt after the bomb-rain of the Second World War, and at the same time the labour unions became an important force in society. During his youth Brian Griffin would never have dreamed that only four decades later the power of the unions would be gone and that he would be standing on the ruins of this industrial powerhouse – and that it would be his inspiration for the creation of great works of art.

Brian studied photography in Manchester, and started working independently as a photgrapher after that – at first on a starvation budget, but gradually with increasing success. During his career he has worked on major projects of different kinds, among others for magazines, fashion houses, in advertising, for the music industry and big corporations, in addition to independent works. Brian has published more than ten books on his photography (and a new book will accompany this exhibition), taken part in a great number of exhibitions in many countries over the past thirty years, made eight short films and a number of television commercials, reated perfomances and sculptures. His photographs are to be found in museums in Britain, Portugal and Germany.

This is the first retrospective exhibition of the works of Brian Griffin ever held. The exhibition has been given the title “Influences”, because it is not organized in a chronological order, but looks to the influences that have shaped the artistic vision that appears in his works. These are certainly diverse: His childhood in the Black Country, the Cold War, Expressionism, Surrealism, the paintings of Casper David Friedrich, the books of Franz Kafka and the films of  Jacques Tati, the Social Realism of Communism and Fascism,  the religions paintings of earlier centuries and finally Iceland, which the artist has taken to his heart in the last few years.

The reason that this first retrospective of Brian Griffin is held in Iceland is found in this last influence. Brian is married to an Icelander, Brynja Sverrisdóttir, an artist in her own field. Through her he has in the last few years been getting to know the country and its people in such a way, that he fully intends to settle here eventually; the country has taken a firm hold on him. 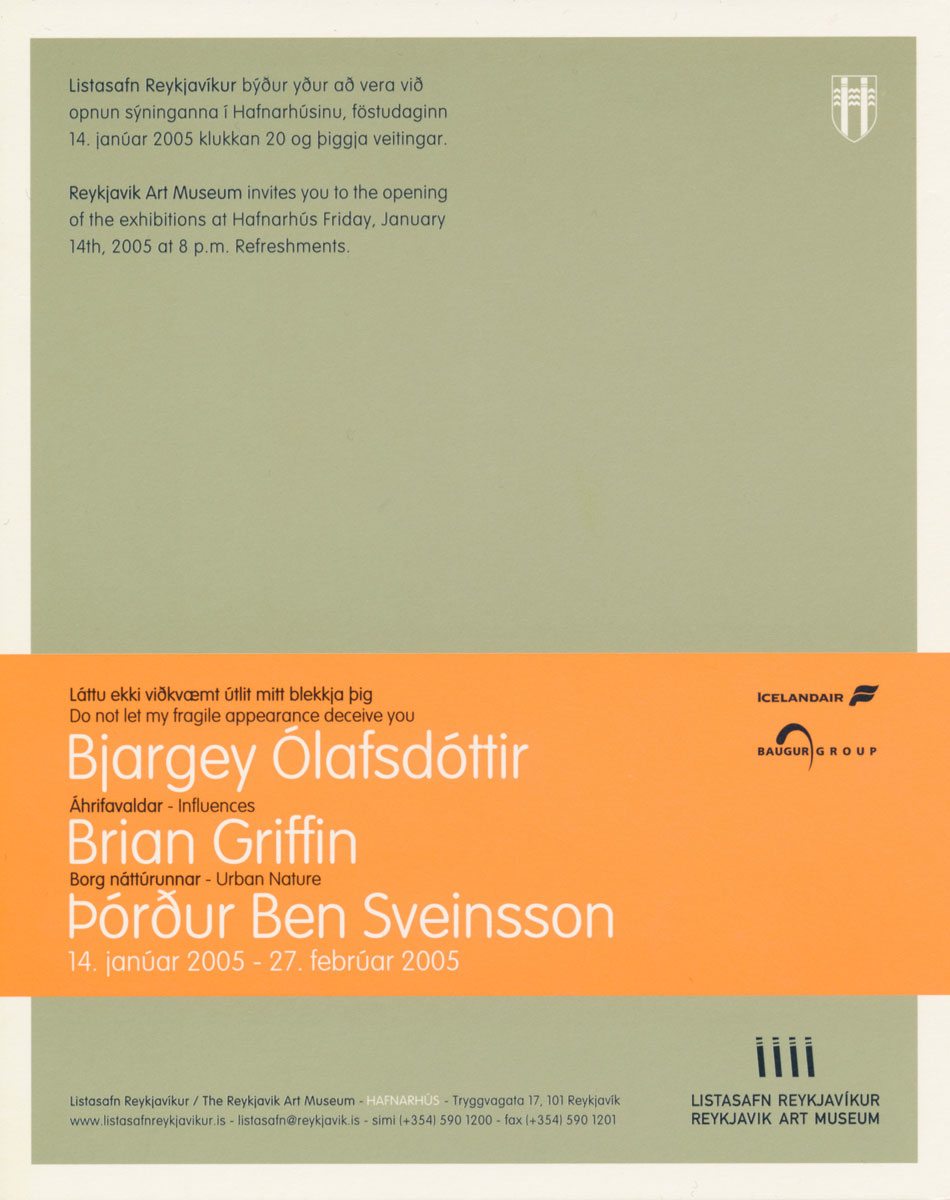