Dreams of the Sublime and Nowhere in Contemporary Icelandic Art

Ranging from panoramic landscape photographs from the 1920s to multi-media installations, the exhibition showcases diverse visions of the Icelandic wilderness. Classical and modernist works are juxtaposed to contemporary landscapes by some of Iceland’s most prominent artists

To travel north has always been a challenge, and Iceland in particular, speaks to the imaginative face of the sublime, the dynamic aspects of the idea. As a place it has for centuries been the terra incognita in the eyes of the outside world, a place of “nowhere” where “anything can happen”. The experience of the sublime is by definition, one that subverts order, coherence, a structured organization. As a place of perpetual geological change, ravaged by volcanic eruptions and massive glaciers, Iceland has through the ages evoked a mixture of wonder and fear. One could even say that the Icelandic highlands could be experienced as a prime example of the classical notion of the sublime: "Whatever operates in a manner analogous to terror, is a source of the sublime. "

As an imagined space the highlands have a long tradition in the cultural history of Iceland as being a place of darkness and death, a space on the margin of society, hosting the ‘other.’ However, the inland had no distinctive meaning, it had no religious, historical or mythical narrative attached to it, no interpretive context which would enable appreciation, it was pure vacuity, solitude and silence.

The controversy around the construction of a new hydroelectric power station and dam in the pristine highlands of Iceland created a public awareness of the existence of a different kind of space in Icelandic nature. This space might be called “nowhere”, “otherness” or just “something else”. Recent visual productions all translate important shift in meaning from the traditional 20th century national discourse, where nature as well as it’s representations was perceived as constructor of national identity, towards global ethical and political questions concerning the future and the meaning of human life. The implications of this shift affect not only the discourse of how art is placed within the public realm, but the very definition of what constitutes an identity of a place and the people who live there.

The romantic striving for communion with nature is far from the concerns of most Icelandic artists, who taste the experience of their unspoiled homeland with a grain of salt. Their relationship with the island as a home, geographical space and identity is complex and not easily grasped by the foreign observer. Constructing around layers of visual and literary experiences, they are principally reacting to the changing place of Iceland in global ecological and political context.

In a period of intense global shifts, abstractly mediated through international media and mobile networks which are radically reforming our contemporary notions of places, it is not always easy to get a grasp on the deep social and geographical changes happening in front of our eyes. By putting forward a new understanding of the sublime, Icelandic artists are contributing to a recent notion of sublime in an environmental and aesthetic context, facing the fact that even in Iceland we find the visual landmarks of global economy.

In conjuncion with the exhibition, a special space was created where children and adults could contemplate their planet, their country, and the landmarks of their environment. What points of orientation do we use to place ourselves in nature? The fun learning materials and puzzles may also be used to get to know the rest of the museum’s exhibits. 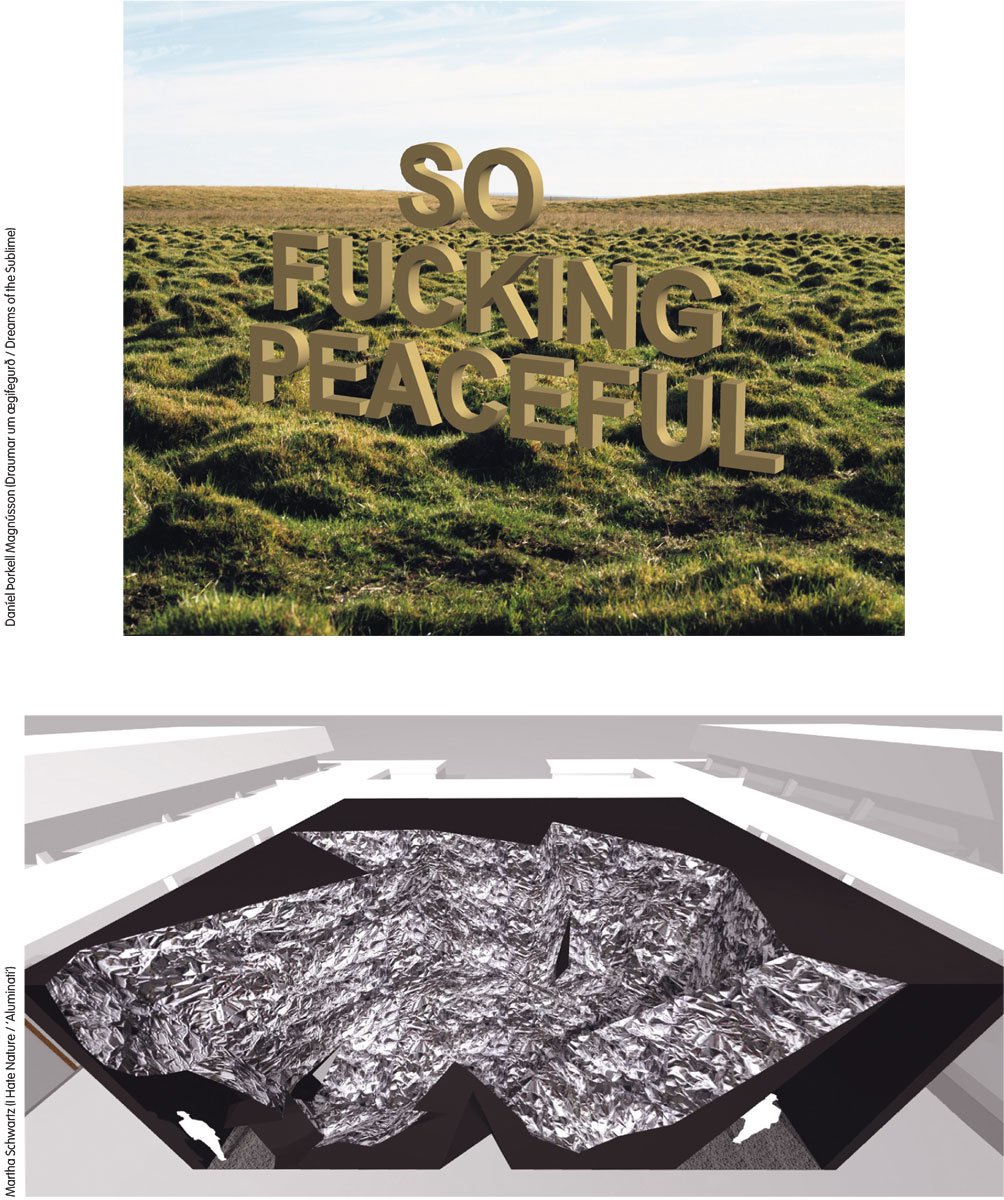 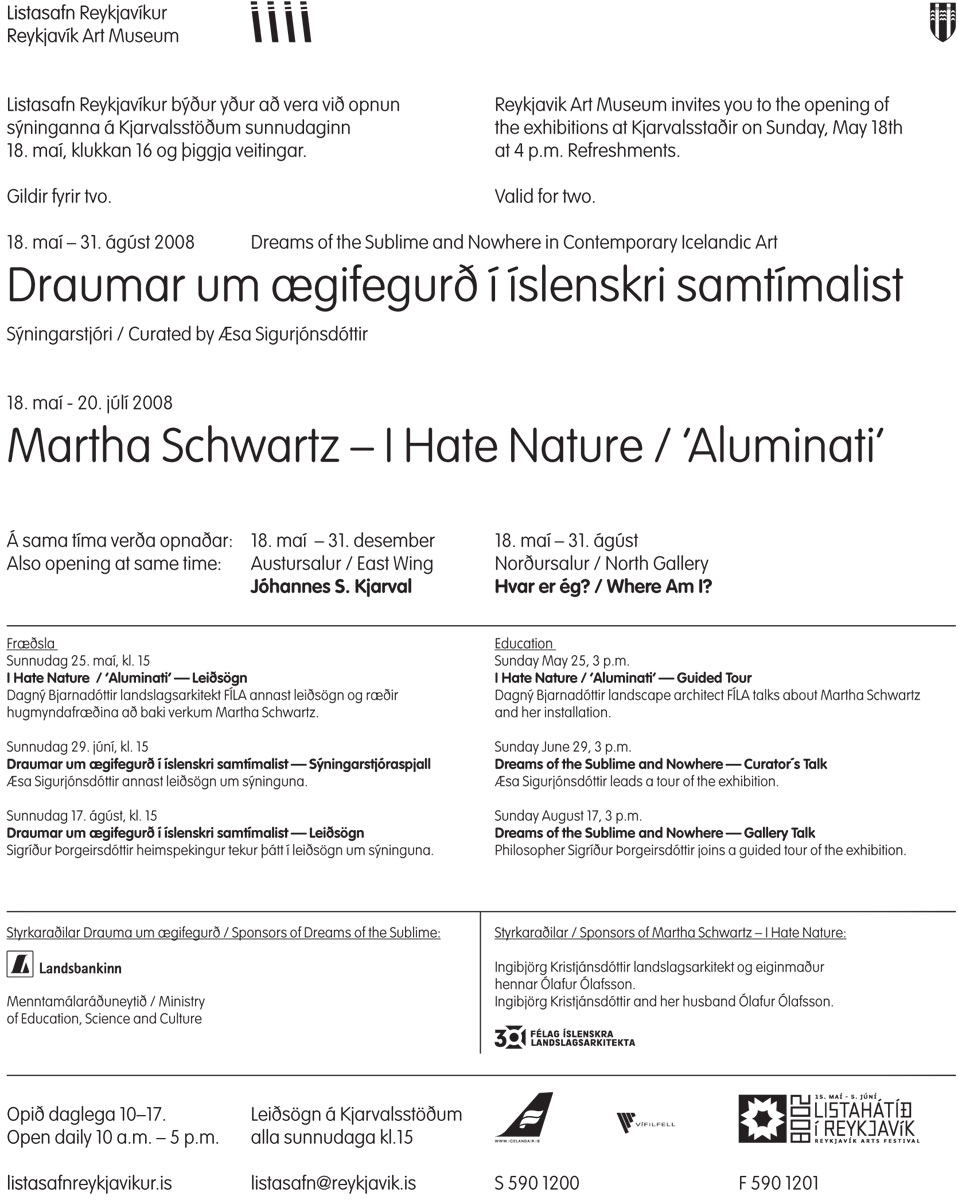