Ásmundur Sveinsson and Þorvaldur Skúlason: Children of the Eye

Works by Ásmundur Sveinsson (f. 1893 – 1982) and Þorvaldur Skúlason (f. 1906 – 1984). The exhibition is a collaboration between Reykjavík Art Museum and the University of Iceland Art Collection.

Ásmundur and Þorvaldur both focused greatly on the formalist imagery of their work, thus connecting themselves to modernist traditions. They were aware of the historic value of their material’s sources and focused on the physical attributes of their work, rather than seeing them as windows to their surroundings. In spite of the difference in their chosen media, Ásmundur and Þorvaldur were kindred spirits in many ways and Ásmundur referred to Þorvaldur as his artistic soulmate. Although Þorvaldur’s turn to abstract imagery can be placed in time to a certain extent, it is hard to pinpoint down the exact time. The same can be said for Ásmundur: It is impossible to say if and when he cut away from figuration in his work. Gradually the abstract took over both artists. The art work became independent, without any references to the material world. Their careers thus reflect the modernist progress, heading from accepted routine towards a more pointed dialogue with the artist’s present.

A child learns to recognize forms and colors long before it knows words or letters. The human mind tends to search for something familiar in that which the eyes can see; for harmony between tangible things and abstract forms. The mind analyses the forms which the eye sees and connects them to familiar forms creating a visual memory bank or a visual world of memories which we use to process new influences. It is perhaps possible to say that our sense of beauty is based on such mental associations, the connection between what we see and what we’ve seen before. Such experiencing and processing seems to take place without the aid of language or conscious reasoning. During the rise and peak of abstract art, artists gradually severed all connections with representational artwork, creating an independent imagery based on a familiar reality. Driven by experiments on two-dimensional surfaces and three-dimensional forms. Like an automatic algorithm, artists mapped out different ways of implementing lines, colours and forms. This process took over the whole of the Western art world during this period. In Iceland, several artists participated in this movement and their ideas involuntarily overlapped in the constant development of the new imagery. Two of those children of the eye moved in their own separate dimensions; Þorvaldur Skúlason and Ásmundur Sveinsson. Ásmundur Sveinsson was a pioneer of sculpture in Iceland. During his career his style ranged from classical, massive and down to earth pieces to free, abstract imagery where lightness and play dominated.

Ásmundur was born in 1893 in Kolsstaðir in Dalasýsla, and he lived and worked there until he was twenty-two years old. Early on he developed a passion for art, but this farm boy from the valley did not have many artistic idols to look to in Iceland, as very few of his countrymen had studied art. Finally, in 1915, Ásmundur moved to Reykjavík to study woodcarving with Ríkharður Jónsson and drawing with the painter Þórarinn B. Þorláksson. When Ásmundur graduated in Reykjavík in 1919, he moved to Copenhagen and studied for the next ten years, first drawing in Denmark for one year and later sculpting with Carl Milles in Stockholm. Ásmundur graduated from the Swedish Art Academy in spring 1926 and went to Paris where he received guidance from the French sculptor Despiau, amongst others. In 1929, Ásmundur moved back to Reykjavík and started his career as a sculptor.

Originally Ásmundur’s work contained ideas connected to the Icelandic tradition of storytelling and the reality of the working classes. His work from this period shows us the conversion of the bodies of these large and coarse folk-heroes and guide us towards a simplification of the natural form, where all details are omitted. Ásmundur’s work was influenced by many different things. He himself described very influential experiences from his youth: doing carpentry and various crafts on the farm. These influenced both his style and his choice of material. He was also heavily affected by modernist currents in mainland Europe after his years there. Ásmundur also had a unique talent of materialising his ideas in the spirit of cubism, for example, but at the same time maintaining his personal style and free attitude towards different -isms.

Around midway through his career – in the 50’s and 60’s – Ásmundur started working with iron, and there was a marked change in his art and methods. He stopped sculpting and casting his work and started collecting raw materials.He gathered iron and metal scraps and often used them without much transformation. In this period Ásmundur made the conditions of the material his focus, as well as modernist thought, and in these sculptures we can clearly see the influence from abstract paintings where the iron becomes an abstract drawing, as well as a tangible thing. The shape and energy of the sculpture emphasises the features of the material, allowing the viewer to look, feel and enjoy. Through this abstract use of lines and shapes you can still sense the artist’s closeness to nature, the Icelandic myths and storytelling tradition.

In 1976 Ásmundur entrusted his life’s work to the city of Reykjavík after his day. He died on Dec 9th 1982 and the museum, Ásmundarsafn, was opened to the public a year later, in 1983.

Þorvaldur Skúlason paved the way for new ideas in contemporary Icelandic art, with abstract experiments on canvas. He was an inspiration to up-and-coming artists and led a group which held the so-called ‘September Exhibitions’ in Reykjavík towards the end of the 1940’s and the start of the 50’s. Þorvaldur was a founding member of the SEPTEM group in 1974 and stayed a member until his death.

Þorvaldur was born in Borðeyri at Hrútafjörður in 1906, but grew up in Blönduós. He moved to Reykjavík in 1921 and first received guidance from the woodcarver Ríkharður Jónsson and painter Þórarinn B. Þorláksson. Later he studied with Ásgrímur Jónsson. In 1927 Þorvaldur participated in his first public exhibition with Listvinafélagið (The Art Lovers Association). In 1928 he received an official grant from the Icelandic government and subsequently moved to Oslo for further studies. Among his teachers were Axel Revold and Jean Heiberg, whose work derived from the colour and form theories of the French painters Cézanne and Matisse. During this period, Þorvaldur’s work was still representational, but he seemed to have given abstract imagery some thought before leaving Iceland.

In 1926 he drew a picture – possibly his first conscious attempt to abstract imagery – and this small drawing which he drew in his notebook was signed and named Composition. Later he crossed out the title, although it is still clearly visible. For whatever reason he did this – and shunned abstract imagery for the next two decades – it is clear that his interest had been awakened.

Þorvaldur moved to Paris in 1931 and worked under the guidance of Marcel Gromaire for one year. From there he went to Copenhagen, and back to France in 1938, this time to Tours. Þorvaldur himself said that this was the time he started painting abstract images. When the Germans occupied France, he was forced to leave in a hurry, leaving all his artworks behind. It is not known what happened to this collection, and Þorvaldur thought his landlord might have sold it off cheaply. Once he returned home, Þorvaldur did not see any way to carry on his abstract experiments for a while.

Around the middle of the 1940’s, Þorvaldur picked-up where he had left off, and delved into compositions similar to the one he had drawn in his notebook twenty years previously. From there and until he died on August 30th 1984, he worked energetically at developing his own abstract imagery. Even if Þorvaldur himself mostly exhibited his oil paintings, he also drew a lot and left behind a large collection of drawings, sketches and water colours which are preserved in The University of Iceland Art Collection. The drawings offer important insight into the way his work was planned and developed. Along with his paintings they are the backbone of a special department in the University: Þorvaldur’s Museum. 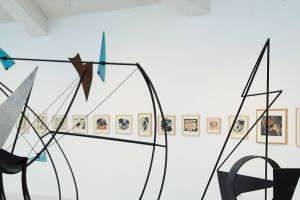 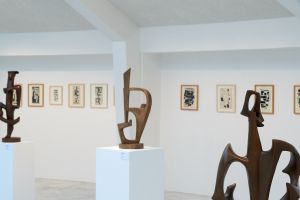 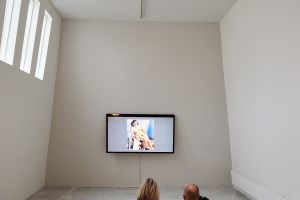 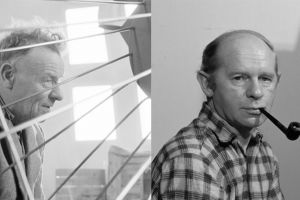