Hafnarhús is situated by the old harbour in the oldest part of Reykjavík, where the earliest wharf and age-old moorings lay. The building was designed by one of the originators of Icelandic architecture, architect Sigurður Guðmundsson, in collaboration with harbour master Þórarinn Kristjánsson. The building was built in 1933-39, expanded in 1957-58, and renovated by the architect office Studio Granda in 1998-2000 to house the programs of the Reykjavik Art Museum. Hafnarhús houses works from the collection of the artist Erró, from his generous bequest of artworks and books to the city of Reykjavík, and also hosts a variety of contemporary art exhibitions.

History
Originally built as an office and warehouse for the Port of Reykjavík, Hafnarhús rose in several stages on a large quayside area that was filled in from 1913-17. In its time, Hafnarhús was one of the largest buildings in Iceland and great care was taken in it construction. Its design bears the hallmarks of the International Style in modernism that developed in the interwar period in Central Europe, notably in the well-known German Bauhaus School. In 1998 an architectural competition was held for designs to renovate the building for the Reykjavik Art Museum, which had a growing need for space, due not least to Erró’s magnanimous 1989 art bequest.

The museum was formally opened in April in the year 2000, when Reykjavík was one of nine cities designated as European Cities of Culture. In their award-winning proposal, Margrét Harðardóttir and Steve Christer of the architecture office Studio Granda took the historic locale as their point of departure. In the past, looking landward from the wooden wharf that lay where Hafnarhús now stands, the 1862 Wharf Building (Bryggjuhúsið) at Vesturgata 2 above the Hafnarhús site functioned as a formal gate to the city of Reykjavík. For decades an open walkway led straight through the Wharf Building, as free public access to the wharf had been mandated by the building permit. The Wharf Building has been altered over the years and in 1927 the walkway was closed, but remnants of the ancient stonework at the end of the wharf are still visible on the seaward side of the building. The locale’s importance to Reykjavík is reflected in the fact that the city’s street-numbering radiate from this spot. The memory of the old wharf was revived in the renovation of Hafnarhús by means of an axis that cuts diagonally through the old building, reopening the connection to the harbour and the sea. The main entrance and central artery of the museum thus point anew to the vanished city gate and the city’s old lifeline to the greater world.

The building
Hafnarhús’s original role as industrial space is reflected in its outward aspect, in that the building is relatively introvert or closed to the outside. In accord with the International Style in modernism, the building embraces the streamlined formal language of cruise ships and airplanes, eschewing decoration and emphasizing the building’s function and the interplay of horizontal and vertical lines, for example in pronounced lines around the windows, underscoring their external arrangement in a horizontal border and, on the north wall, in vertical bay windows. Large truck bays on the east and west sides, testifying to past vehicular traffic right through the building, were let stand in renovations along with other original doors at street level, providing an unusual viewing opportunity directly from the street into one of the museum’s largest galleries. The present use of the building is underscored by painted panels in white or grey, and the art museum’s main entrance is cut into the south face, where a concrete awning, carefully angled over glass doors, arrests the eye. From the entrance, the visual corridor runs clear to the harbour beyond.

Approach
A concourse floored with hardwood boards leads through the building from the lobby, creating a rather narrow space that opens upward toward the next level. The walls and original weight-bearing columns are clad in rough-rolled steel, making a striking impression redolent of rough-and-tumble modern shipyards. Flights of stairs leading upward do not touch the wooden concourse but rather hang from the concrete floor of the next level, encased in walls that are polished smooth, painted white, and slightly, almost imperceptibly curved. The complexity of the visual impression is deepened by the possibility of opening the steel walls along the walkway, onto the inner courtyard of the building, open to the sky, or, in the other direction, onto a multipurpose room: the space can be partially or completely transformed and its horizontal or vertical lines emphasized at will.

Studio Granda’s play with old and new, rough and delicate, direct and indirect light results in a highly unusual atmosphere in the six galleries on either side of the inner courtyard, each of which juxtaposes the building’s history and contemporary art in its own way, with white walls or raw concrete, or the square or octagonal support columns of the structure’s underlying grid. The museum café lies at the far end of the wharf axis on the second storey, facing the entrance to Reykjavík harbour and offering an alternative, live, ever-changing view of ships, the sea, and the mountains on the horizon. Awards: Icelandic Environmental Services Association Award (2001). Nominated for the Blueprint Architecture Awards ‘Best Public Building Refurbishment’ (2001) and the European Union Prize for Contemporary Architecture – Mies van der Rohe Award (2001). Recognition for outstanding design for accessibility, Sjálfsbjörg, the Icelandic Association of Handicapped Citizens (2000).

Architects
Master Builder Sigurður Guðmundsson (1885-1958) was a seminal figure in Icelandic architecture. Following in the footsteps of architect Guðjón Samúelsson, Sigurður studied at the Royal Danish Academy in Copenhagen from 1915 to 1925. Although he never completed his degree, he was nonetheless one of the most influential spokesmen in Iceland for new currents in architecture, ranging from Nordic Classicism to Functionalism and Modernism, with an emphasis on simple and artistic form. Sigurður founded the first privately-run architectural firm in Iceland, in which many of Iceland’s most prominent architects got their starts. Major works: The primary school Barnaskóli Austurbæjar (1924-30). The nursing home Grund (1932-34). Garður, university dormitories on Hringbraut (1932-34). Hafnarhús at Tryggvagata 17, now part of the Reykjavik Art Museum (1933-39 and 1957-58). Studio for sculptor Ásmundur Sveinsson, now Ásmundarsalur at Freyjugata 41 (1933-35). Station house, the Ljósafoss hydroelectric plant (1935-37). The Merchant Marine Academy of Reykjavík (1942-45). The National Museum of Iceland (1945-52). The College of Navigation in Reykjavík (1942-45). Private residences at Ásvallagata 14 (1928), Laufásvegur 70 (1927) and 75 (1929), Garðastræti 41 (1929), Smáragata 16 (1931), Sóleyargata 11 (1931) and 29 (1932), Freyjugata 46 (1931), and Freyjugata 41 (1933).

Studio Granda, one of the best-known architectural firms in Iceland, was founded in 1987 by architects Margrét Harðardóttir (1960-) and Steve Christer (1959-), both graduates of the London Architectural Association School of Architecture. Studio Granda has won attention in the international arena for bold and discerning work that conveys strong ties to Icelandic culture and landscape while at the same time incorporating themes from the history of international architecture from Greek antiquity to Nordic modernism. The firm’s laurels include the Icelandic Visual Arts Award, the Nordic Award for Sheet Metal in Architecture, nominations for the Mies van der Rohe Award and the European Union Prize for Contemporary Architecture, and listing of their work in the Phaidon Atlas of Contemporary World Architecture. Studio Granda was nominated for the esteemed Pritzker Architecture Prize in 2002. Major works: The Reykjavík City Hall (1987-92). Courthouse of the Supreme Court of Iceland at Arnarhóll (1993-96). Höfðabakki Bridge (1994). The Reykjavík Art Museum, Hafnarhús, renovation (1998-2000). Private residence at Skrúðás (2000-04). Bifröst School of Business, including the main building, campus layout, and research center (2001-07). Primary school additions, Laugalækjarskóli (2001) and Vogaskóli (2005-07). Country residence Hof at Höfðaströnd (2003-07).

Artist
The artist Erró, or Guðmundur Guðmundsson, was born in 1932. Erró studied at the Icelandic College of Arts and Crafts from 1949-51 and went on to the Oslo National Academy of the Arts and further studies in art schools in Florence and Ravenna (1955-57). He is indisputably one of the best-known Icelandic contemporary artists. Erró’s work is inspired by surrealism and is in the vanguard of pop art and European narrative painting. In 1989 Erró gave the city of Reykjavík a large collection of his work, which has been a mainstay of Hafnarhús since its opening. Erró has also turned over to the museum a broad collection of his personal effects and books. The Erró collection grows with every passing year. 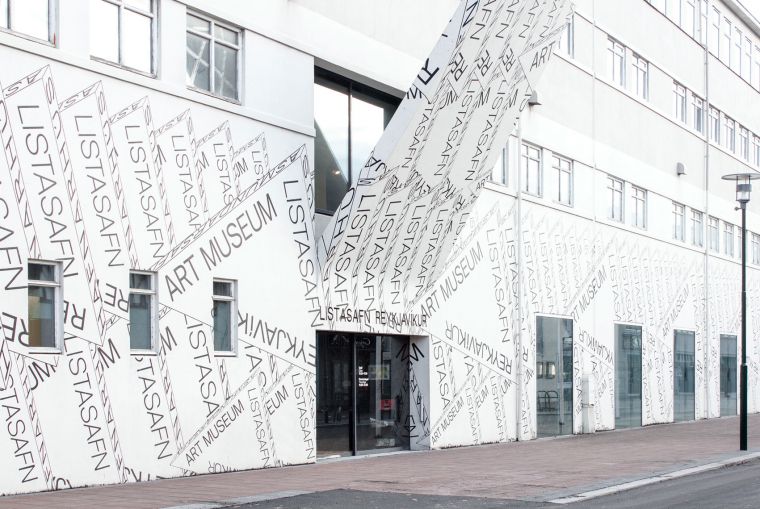