Imagine a beach. The burning sun, sunscreen and bright bathing suits and sweaty palms and legs. Tired limbs sprawled lazily across a mosaic of towels. Imagine the occasional squeal of children, laughter, the sound of an ice cream van in the distance. The musical rhythm of waves on the surf, a soothing sound. The crinkling of plastic bags whirling in the air, their silent floating, jellyfish-like, below the waterline. The rumble of a volcano, or of an airplane, or a speedboat. Then a chorus of songs: everyday songs, songs of worry and of boredom, songs of almost nothing. And below them: the slow creaking of an exhausted Earth, a gasp.

Described as “a lament to the eclipse of the world … an astonishing performance” (The Guardian), the opera Sun & Sea took the 2019 Venice Biennale by storm as the Lithuanian pavilion, winning the coveted Golden Lion. Arriving at the Reykjavík Art Museum (Hafnarhús) for the Reykjavík Arts Festival following its triumph, this durational installation/performance will surprise, mesmerize and blur the lines between art forms. The Reykjavík performance features black sand from Iceland’s coastline.

The performance loops continuously, for four hours each day from 12-16h00. The audience is free to come and go as they please.

The exhibition is a part of Reykjavík Arts Festival. 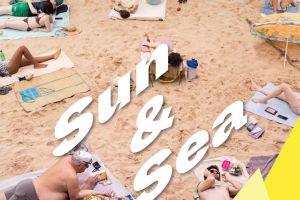