This year marks the 25th anniversary of the installation of the environmental artwork Áfangar on Viðey island off Reykjavík. The work comprises 18 basalt columns which stand in pairs around the circumference of the western part of the island. The columnar basalt alludes to the geological history of the island, while the placing and height of the columns underline its contours and topography. The relationship with the environment is a recurring theme in Serra’s work, but Áfangar is unusual due both to its scale and the material used.

The exhibition includes drawings of Áfangar made by Serra in 1990, and works of graphic art from 1991. The works are not conceived as diagrams or illustrations of the environmental work: in them the artist seeks to “distil” the work “into another language,” as Serra puts it. “The experience of building the sculpture acted as a catalyst that led to separate activities like etching and drawing.” Hence the pieces are works of art in their own right, which the observer can appreciate on their own terms. Nonetheless, all visitors are urged to go out to Viðey island to see Áfangar for themselves.

Three videos by Sveinn M. Sveinsson (Plús film) are also shown in the exhibition, projected simultaneously onto three walls of Gallery C. On one wall Serra talks about his ideas. The second video shows the creation and installation of the work and the third shows the completed work in changing conditions and seasons of the year.

The bond between the exhibition and the environmental work itself on Viðey is underlined by regular ferry services to the island. Guided tours will be available in Hafnarhús and on Viðey every Saturday in June, July and August. Four week-long art/nature courses are also offered for children and youngsters, offering them the opportunity to enjoy Icelandic nature, draw, paint, model, express themselves in writing, and connect with the work Áfangar and the exhibition at Hafnarhús.

Richard Serra (b. 1939) is one of the most renowned artists of today, and many leading museums have hosted exhibitions of his work. He is known especially for his steel sculptures made for cities and museums around the world.

Samstarfsaðili:
The exhibition is sponsored by the U.S. Embassy in Reykjavik, Iceland and Landsbankinn. It is a part of the Reykjavík Arts Festival.
Invitation card: 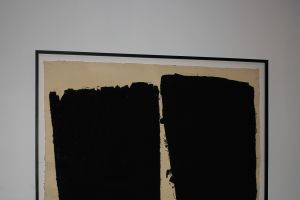