Sigtún, the site of the Ásmundur Sveinsson Sculpture Museum, was once a barren rise of gravelly mounds on the outskirts of Reykjavík. The museum building, built in three stages (1942, 1946, and 1955-59), was not designed in the traditional way but rather is the creation of sculptor Ásmundur Sveinsson, albeit with assistance from architect Einar Sveinsson in finalizing the plans. The building was converted into exhibition space in 1982, and architect Manfreð Vilhjálmsson was hired to design a connecting building between the two original structures (1987-91). The museum maintains a continuous exhibition of the sculpture of Ásmundur Sveinsson, who bequeathed to the city of Reykjavík a large portion of his work as well as the building in which the collection is now housed.

History
The Ásmundur Sveinsson Sculpture Museum was originally built as a studio and a dwelling for Ásmundur Sveinsson and his family just west of Laugardalur at Sigtún, where the city of Reykjavík had apportioned Ásmundur a lot. In those years the area was undeveloped and the livestock and hayfields of working farms still occupied Laugardalur’s low ground; Ásmundur Sveinsson described his own lot as “treeless and naked.” He had strong opinions on how buildings and developments should be harmonized with the features of the landscape, and like a pioneer he bent to the task of realizing his ideas in construction on his lot. In 1942 Ásmundur built the so-called Dome, a square residence with a studio in its dome-shaped upper story. The form of the building is inspired by Greek and Turkish vernacular architecture, for a barren landscape that Ásmundur Sveinsson considered comparable to that of the Mediterranean. Four years later he increased his studio space, adding the narrow “Pyramids” wing across the front of the house, now deriving its trapezoidal form of slanted walls and flat roof, as well as its imposingly framed central entrance, from the large buildings of ancient Egypt. As before, Ásmundur modelled the addition in clay and later moulded it in plaster-of-Paris; in this case he secured the assistance of cabinet-maker Jónas Sólmundarsson and engineer Einar Pálsson for plans and technical assistance in construction. A decade later Ásmundur built the Shed, a U-shaped workshop and gallery for work that did not tolerate standing outdoors behind the other building. His good friend Einar Sveinsson, the architect, then Master Builder to the central government, provided drawings and technical assistance. The artist himself worked on constructing the buildings—dug foundations and built moulds, mixed concrete and bent steel reinforcements, and lastly strained at pouring the concrete. The yard around the buildings also served Ásmundur as a workspace for larger outdoor works. As Ásmundur had bequeathed his work to the city of Reykjavík, it was decided upon his death at year’s end in 1982 to prepare an exhibition space for the collection in his own buildings and the buildings assembled under one roof for this purpose.

The building
The Ásmundur Sveinsson Sculpture Museum buildings are an interesting artistic experiment in developing an Icelandic building style fit for a rugged, treeless country. The building has a sculptural appearance in its geometric force, as its smooth-polished, white-painted concrete stands out against the clear blue of fair skies or fast and furious winter snows. It is also interesting to consider the evolution of the building in light of changing emphases in the artist’s own career.
The first structure, the Dome, as an equilateral rectangle with a dome on top, does not reflect a clear formal direction; but the second structure, the Pyramids, does, albeit not in shape but in its placement alongside the house as a facade toward the street. The exterior form or volume of the building is rendered as a mass or solid that has been chiselled and modelled like marble in a sculptor’s hands. The window openings are small, intended more to admit light throughout the seasonal variations in daylight than to open the house up to the view. The heavy form and small window openings are evocative of a tussock in an open field, enduring the wind and the weather without seeming the worse for wear, and indeed in this period Ásmundur Sveinsson was creating his massive outdoor works such as the Weather Forecaster, the Water-carrier, and the Washerwomen, as well as his major reliefs for public buildings.
The third part of the building, the Shed, is by contrast semi-circular in shape, curling in on itself in one direction and arching its back to the other. With a glass northern exposure in its slanted ceiling and its support columns in plain view like ribs in a skeleton, the Shed structure gives a much lighter impression than the earlier two buildings, and this corresponds to a new direction in Ásmundur Sveinsson’s art, then evolving from heavy, massive, and concrete statues toward lighter and more transparent three-dimensional works of wood and metal that toyed in a new and different way with the space they surrounded and enclosed. At that time Ásmundur was also working with iron, making images, railings, and weathervanes for newly-built public schools. In a state radio interview, Ásmundur declared, “Now that’s something that art must reckon with: space! Before, when I was working in stone, it was the volume, the mass, that had the upper hand and that I had to handle, but when you’ve got a piece of iron and you’re bending it in all directions, you’re capturing the space that the material can absorb. It’s a whole new aspect.”

Approach
The indoor ambience is tempered by the dissimilar parts of the building. From the street a walkway leads straight through the entrance chiselled into the facade of the Pyramids and proceeds up several steps into the square building of the Dome. A narrow staircase rises into the peculiar vault under the semi-spherical roof, a remarkable place for an enterprising man to conduct his work. The space feels familiar, reminiscent of the Pantheon in Rome, Egyptian temples, and Galileo’s telescope—gold nuggets from Western culture and architectural history—but on a different scale. Here everything is cut small and trim, making the proportions of person to building exceptionally intimate. In the Shed and the connecting building, a white-veined marble floor has been laid to reflect the daylight coming down through the glass ceiling back onto Ásmundur’s three-dimensional works, which either stand on the floor or hang from the ceiling. The atmosphere is simultaneously reticent and flowing, as the movement of the daylight guides the movement of attention through the space.

Architects
Einar Sveinsson (1906-1973) was the first Icelandic architect to study in Germany, where his broad range of studies included urban design. He graduated from the Technical University of Darmstadt in 1932 and returned home to become one of the main apostles of functionalism in Iceland, though he soon developed his own highly idiosyncratic style. In 1934 he was hired as Master Builder for the city of Reykjavík, and divided his time between residential, public-sector, and urban design, maintaining an emphasis on an artistic approach and close collaborative working arrangements with artists, among them Ásmundur Sveinsson. Einar Sveinsson left a very large oeuvre that includes many of Reykjavík’s best twentieth-century buildings. Major works: Private residence at Freyjugata 43 (1933). Workshop and storage buildings on Snorrabraut for the Reykjavík municipal bus service (1933). The Jón Þorgeirsson Sports Club on Lindargata (1935). Residences for the Building Cooperative Society Félagsgarður at Hávallagata 3, 7, 9, 13 (1935). Residences for the Building Cooperative Society of Printers on Hagamel 14-24 (1945-48). Design of the urban neighborhoods Norðurmýri (1934) and Melar (1936). Development proposal for midtown Reykjavík (1943). Primary schools: Laugarnesskóli (1934-45), Melaskóli (1944-46), Langholtsskóli (1948-52), Laugalækjarskóli (1959-64), and Breiðagerðisskóli (1956-60). Apartment buildings at Hringbraut (1942-44), Skúlagata (1944-48), Lönguhlíð (1945-49), Kleppsvegur (1956), and Sólheima (1957). Weigh-station shelter for the Port of Reykjavík, now Hamborgarabúllan Tómasar (1945). Preventative Care Clinic (Heilsuverndarstöðin, 1949-55). The Reykjavík Municipal Hospital (Borgarspítalinn, 1950-73). Swimming pools and grand stand at Laugardalur (1954-64). The Ásmundur Sveinsson Sculpture Museum, the Shed (1955-59). Hafnarbúðir at Geirsgata 9 (1958-62).
Manfreð Vilhjálmsson (1928-) received his architectural degree from Chalmers University of Technology in Göteborg, Sweden, in 1954. In 1960 he established his own architecture office. Manfreð served as chairman of the Association of Icelandic Architects from 1965-67 and has won many awards, including the Honorary Prize of the DV Cultural Awards. In 1996 he received the highest presidential award in Iceland, the Icelandic Knightly Order of the Falcon. Major works: Gas stations for Nesti (Fossvogur and Elliðaá, 1955-57). Residences at Mávanes 4 (1964), Barðavogur 13 (1967), and Blikanes 21 (1967). The school building at Skálholt (1971). The National and University Library of Iceland (with Þorvaldur S. Þorvaldsson, 1972-94). Headquarters for the Laugardalur campground (1985-89).

Designer
The sculpture garden at the Ásmundur Sveinsson Sculpture Museum was redesigned and enlarged from 1994-2000 in accordance with the proposal of landscape architect Kolbrún Þóra Oddsdóttir. The artist Sculptor Ásmundur Sveinsson (1893-1982) was educated in art forms most closely related to architecture. He studied wood-carving, freestanding sculpture, and relief sculpture as architectural ornament under the auspices of Ríkharður Jónsson, among others, and at the Royal Swedish Academy of Arts. He divided his time between artwork and the artistic ornamentation of buildings, as well as his own building projects, modelling his own home and studio twice. Ásmundur Sveinsson was seminal to Icelandic sculpture and has been called a folk poet of visual art. In addition to the gift of his Sigtún home and studio, to be renovated and opened as the Ásmundur Sveinsson Sculpture Museum, Ásmundur bequeathed his work to the city of Reykjavík, which may be seen in public places throughout the city as well as in the museum’s sculpture garden. 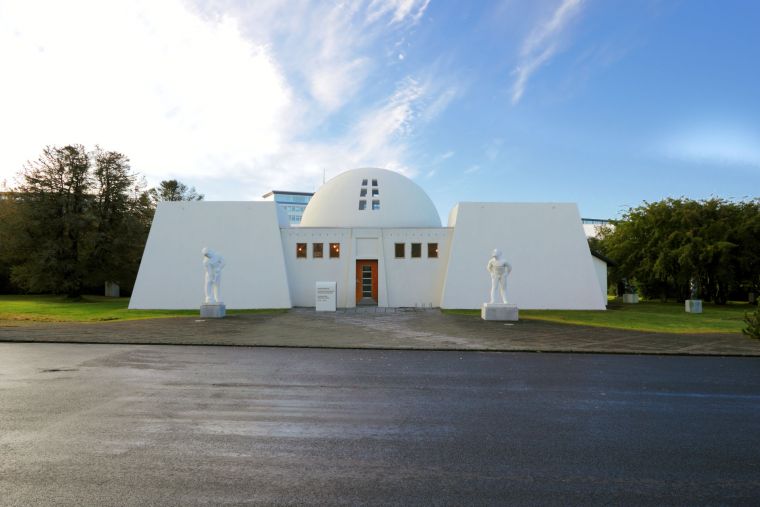